Studies show that online users spend more time engaged on social media channels than any other destination on the Internet.

The good news is that many businesses are wising up and creating teams dedicated to reaching customers on these channels. HubSpot reports that up to 70% of companies surveyed acknowledge that they have dedicated social media teams or even whole departments.

But that doesn’t mean you need a dedicated team to reach customers on social media. In fact, you just need a little time and creative thinking…

Why Use Social Media?

And that’s totally understandable. After all, with so many channels and media formats out there, it can be a world of confusion. But the key to success, in this case, is trying, because social media conversions are more common than you think.

If you’re not using social media, you’re missing out on a huge market. But even if you do have social media accounts, how do you properly utilize them to see those big conversion rates?

We don’t necessarily mean that more channels means better results. Actually the opposite seems to be true. Most social media experts recommend choosing a few strong social media platforms instead of spreading yourself out over every channel available.

However, once you have settled on your chosen channels, you have to make your presence known, and consistency is key.

Focus on the three P’s of cultivating an online presence: While social media is a marketing tool, it’s called “social” for a reason – these platforms are designed to help people connect with other people.

If you’re only in the game to sell products, shill ads, and see your sales numbers rise, then you’re not using these channels to their full potential. Instead, use social media as a way to create brand awareness by telling stories, commenting on and sharing posts from your customers, and engaging users one on one.

People go on social media to read and engage, and when you provide them a way to do that through your channel – whether through a video campaign, moving testimonial, or story about how you came to be – it helps people see you as more than just a company out to make a quick buck.

They will be genuinely interested in your business, and yes, that includes what you sell.

Use a Variety of Media Formats

But that has all changed. Sites like Instagram have created entirely visually-focused media that draws in huge numbers, and – more importantly – almost every social channel has embraced video. If you’re still only posting status updates or sending out your tweets sans photos, you’re missing out on a huge chunk of engagement. The more varied media you can use, the better!

As we mentioned before, consistency is a huge part of success. If you develop a strategy that doesn’t include daily or weekly posts, you’re not optimizing your potential.

Social media is designed to be consumed, and that means users will be in and out (and on to the next thing) rather quickly. The less frequently you engage, the less chances of seeing those high conversion numbers (and don’t blame the social channel for failure if you only post once a month).

But ultimately, your social media strategy still needs to stand out from the crowd. After all, your competitors have wised up and are doing all the same things you’re doing. Here are a few strategies you might test out to see what grabs the most attention (and improves conversions):

Create a specific landing page. Many businesses make the mistake of pointing people to their homepage and expecting their social media followers to know what to do once they get there, which frankly isn’t the case. Instead, consider developing landing pages on your website that reflect content that you would post on each channel and direct people to those landing pages. Be sure to include lead generating forms and CTAs, too. Educational content. People love social media because they can stay up to date on what’s trending and find resources to help with their everyday lives. There’s a reason “How To” videos and blogs get more hits than other content types – because they’re educational and actionable. Social media is the perfect place to promote educational videos or articles to get people engaged. Like, “How to use X product” or “X Ways to Get the Most Out of X Service.”

USE VIDEO. We don’t mean to shout, but we hope we’ve made it clear that you should be using video. It can feel daunting to step into video when you’re used to posting text and images, but consider designating someone from your team to make short videos (anything from a 10-second Vine to a 3 minute YouTube video) that promote or even educate people. You could also have your followers send questions to your PR using Snapchat or Periscope, or launch a 60-second video contest on Instagram. Do an AMA. AMA – or “Ask Me Anything” – is a popular subreddit on Reddit. You start your session and followers can come and ask you anything they want for a certain time, with your team responding live. If that feels too scary (or maybe your audience wouldn’t be up for that), you could also join a forum or answer questions on sites like Quora. These channels take a little more effort, but you can really connect and build a brand in a new and creative way.

Start a story campaign. Create a whole social media campaign for one specific channel. Humans of New York does a great job of highlighting different human interest stories on Facebook and posting them throughout the day (sometimes segmented into different parts – e.g. “Part 1 of 3”). People subscribe to their social media channels to see something hopeful and inspirational pop up into their news feed. Do a case study, or highlight someone from your team, interview a customer on something non-related to your business, or get out into your community and do something good (and then share it). Do a photo contest. A little while back Starbucks launched their #redcup photo contest with great success. People from all around the world took photos with their red Starbucks cups, and they saw a spike in engagement levels. With so many different image-based platforms to choose from – Pinterest, Instagram, Twitter, etc. – there’s no reason not to encourage a little creativity.

Of course, there are many different possibilities when it comes to creative social media strategies, and you’re only limited by your imagination.

That being said, it’s important to remember to use social media as a way to connect and share, not just try to sell something to your audience.

Engage them with as many different forms of media as possible, and make sure to post consistently for maximum results.

Joanne is a writer who specializes in educating online site owners about building a thriving membership business. 10 Ways to Test Your Idea Before Starting a Membership Site 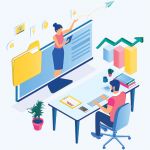 An Honest Look at the Value of Membership Sites

Here’s a reference guide for getting the most out of paid social media ads. Subscribe to get this free resource.